At 6am I presented myself at the Olde Bus Station restaurant in Harrodsburg for a sustaining breakfast of blueberry pancakes with bacon and coffee. Thus fortified I was able to make an early start on the 73 km ride to Bardstown. There were no service stops on the way. The route was less hilly than for some days past and I made good progress.

Dog incidents were few and minor. At Mackville, a lone black dog slowly took up position facing me at the other end of the main street. I thought I was in for a showdown from a 50s Western, where hero and villain fight it out in front of the saloon. But the dog didn't have energy even to bark and I went unmolested on my way.

I came to the Lincoln Homestead State Park, associated with the family of the President's father, and spent a few minutes walking around. It was early in the day and no-one else was about. 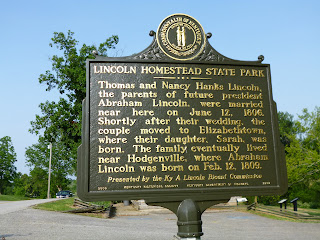 At Maud, I had the good fortune to meet cyclist John, whose home is in Bardstown. He was training for the next leg of his westward cross-country ride, which he is doing a couple of weeks at a time. That will be across Utah and Nevada on the ACA Western Express route. As a local who has already cycle-toured through Kentucky, John's advice was invaluable. We discussed the options for the next few days given the expected extreme weather, with temperatures likely to reach near record levels.

In the end, I decided to stay two nights in Bardstown, doing no cycling on Saturday. I don't really need another rest day so soon after the last one but I have time in hand. I definitely don't want to come down with sunstroke or the ozone poisoning that John was concerned about.
Posted by Aldernath at 09:34