I had a pasta dinner with chicken and broccoli followed by a warm fruit cobbler with ice cream. Then, while a thunderstorm soaked the tents of the three British cyclists in the park, I slept for nine hours. It's a curious, and to me less than ideal, feature of many American towns that you can't easily eat or sleep in the centre. There tends to be a cluster of chain hotels and franchised restaurants at one spot on the edge of town, close to an exit of the interstate or other major highway, and that's where you have to go. Thus, while I was able to stay in the centres of Ashland, Louisa and Charlottesville, since then I have seen nothing of the towns in which I have nominally been staying until I cycled through them on the way out the next morning.

I delayed my departure for half an hour or so after breakfast today to allow time for the fog to lift. The three Brits, Miles, Andy and Alan, caught me on the road and we chatted for a while. At Rural Retreat, they turned left to follow the mountainous road to Damascus. I carried straight on. After dinner last night, I'd done some research. While I haven't planned a day-to-day itinerary for myself, I have noted the daily stages of some previous TransAm cyclists. The question I asked myself was, where did those who stayed in Wytheville go to the next day? As expected, most went to Damascus. A significant minority, however, went to Chilhowie. Where was that? A quick check established that it was 63 km away, conveniently positioned for a rejoining of the official route at Meadowview the next day, without having to cycle the Damascus dog leg. My destination was clear.

After parting from the British trio, I kept company for the rest of the way with Bob, another new acquaintance. He is cycling from New York to Florida to raise funds for his ministry. He does a long ride like this every other year for that purpose. The first time, four years ago, he raised the incredible sum of $50,000. Two years ago, with the economy struggling, he could raise only $15,000. He doesn't know yet how well he's doing this year.

An update on my GPS receiver: I have spent time this afternoon exchanging emails with Garmin Product Support. I found them to be quick and efficient in response. After exhausting all troubleshooting options, they determined that the device would have to come in for repair. This requires me to furnish a copy of the sales receipt showing a date of purchase less than one year ago. That will have to wait till I return to Australia in August. Meanwhile, I do not have use of the device on the the trip for which I bought it. A company that really supported its customers would immediately send me a replacement device so that I could carry on until my own was repaired. 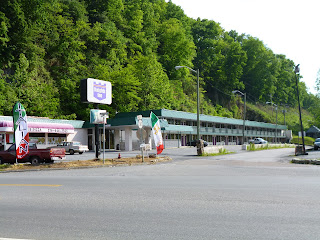 Afterword about the motel: My room was clean and the bed was comfortable. Other things were not quite as usual and made my stay a memorable one. First, the free continental breakfast mentioned in the motel's website did not exist (I made my own). The second time I used the flush in the bathroom, it broke (I delved into the cistern and repaired it myself). The couple in the next room had a fight and threw things out their door, and the man three doors down started a bonfire and incinerated unwanted possessions (I ignored them all). The motel's wifi network worked in the afternoon but not in the evening (I sat in the motel lobby and used the signal from the restaurant next door, where I had just had a meal). Finally and most spectacularly, when I returned to my room and plugged my computer cable into the same power outlet I had used earlier, there was a blue flash and all the lights in my room went out. The management were unable to reset them and offered me a change of room (I declined and went to bed; in the morning the lights were working again).
Posted by Aldernath at 11:30