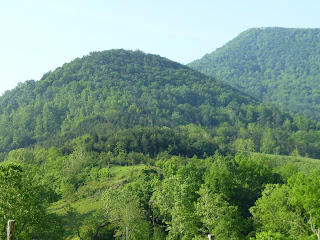 Early morning fog burned off at eight o'clock to reveal blue skies. The day's 90 km of cycling was glorious: along the valleys of Catawba Creek and the North Fork Roanoke River. There were plenty of short hills to test my legs for the more serious climbing ahead, especially towards the end, beyond Ellett. I learned not to stop on an uphill, because if I do I can't propel the heavy bike into motion again - or at least not without weaving erratically across the carriageway. With some road surfaces in this part of the state not quite up to the usual high standard, I also learned to watch out for potholes on the swooping descents. Twice I passed the fresh carcasses of small deer by the side of the road. Scavenging birds lifted off as I approached. Later a beautiful red cardinal flew up in front of me. After Catawba I started to see local cyclists on fast, lightweight, road bikes, perhaps a dozen in all. This must be a favourite training route. 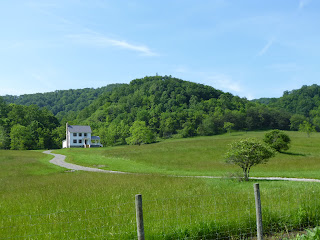 I stopped for refreshments at the gas station in Catawba and for lunch in Christiansburg at the junction where the first of my map sections ends and the second begins. I rolled on to Radford and on the way had my first encounter with a logging truck towing a trailer. The road was one lane each way with no shoulder. I heard the truck coming up behind me. There was a place where I could move out of its way about 5-10 seconds ahead. The truck didn't wait but swept past me, moving leftwards just far enough to clear me and just far enough to cross the centre line and force the oncoming traffic to stop till it had gone past. I didn't think this was a good example of safe driving. 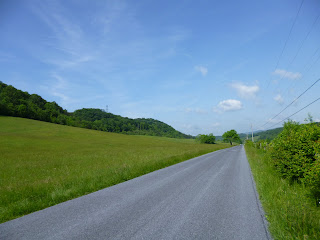 I've now been cycling for a full week and covered the satisfactory distance of 578 km. It has been a week in which I have recovered from the long flight here and the change in time zone and in which I have been overwhelmed by the friendliness and generosity of so many Americans who have gone out of their way to welcome and assist me. The courtesy shown to me as a cyclist by almost all vehicle drivers has also been outstanding. I am having a truly wonderful experience.