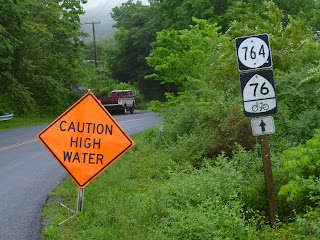 It rained heavily all evening and at breakfast the television was reporting floods on minor roads. Soon after leaving Lexington, I turned on to a minor road with a sign at the top warning of high water. Rather than go back and take US 11 again, I decided to investigate. During the very long descent, I had plenty of time to hope that my way would not be blocked. I did not relish the thought of cycling back up that hill. As it turned out, there was water on the road in only one place and the left edge of the road was dry, allowing me to pass. I crossed several low level bridges which clearly had recently been under water. The river was in spate. 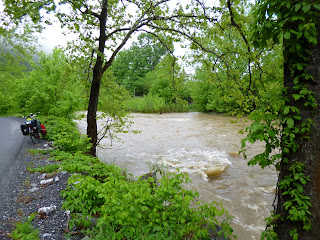 The day's ride was an easy 76 km along a tranquil valley with little motor traffic - perhaps five or six vehicles an hour. During the morning, I met the three British cyclists Bill had told me about in Newport News: Miles, Andy and Alan. They left there the day before me, stayed in Afton the night I was in Charlottesville, and yesterday rode the Blue Ridge Parkway in the rain. They told me a truck crashed off the road on the descent to Vesuvius. See photo on Andy's blog here.

We had lunch at Ransone's in Buchanan. A customer in the next booth picked a live locust off the hood of my rain jacket. While my soup was preparing I went over to the drugstore which shares the premises. The pharmacist found a suitable product for me. I asked him if it was available in a smaller size as I had to be careful about carrying extra weight. He immediately squeezed part of the contents of the tube into a small plastic cylinder and sold me just that for an appropriate fraction of the price. He said he admired what we were doing. It was another instance of unexpectedly helpful behaviour.