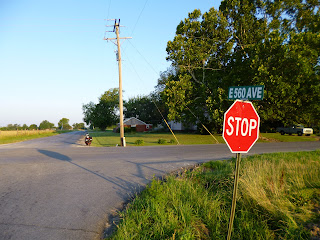 When I checked in to the excellent Holiday Lodge in Pittsburg yesterday, I said I would be leaving before the breakfast service started at 7am. The woman in charge helpfully offered to serve it for me at 6am, which she duly did. Afterwards I headed off to see the most photographed power pole in America. 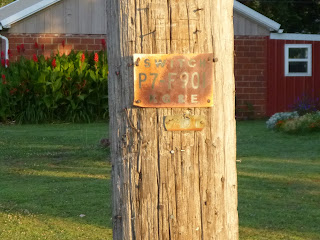 The TransAm Trail makes a turn outside Pittsburg, the location of which is identified on the ACA map by reference to the serial number of a power pole that stands on the corner. Generations of cross-country cyclists have snapped this pole and published it on their blogs to aid others who come after them to identify the junction correctly.

The route today zigzagged alternately west and north across the grid pattern of Kansas roads. The terrain was rolling rather than flat, the hills being substantial enough to make me drop down a few gears to get up them. The wind was stronger than yesterday, still from the south, and gave me a boost on north-heading segments. Last night I adjusted the orientation of my bar ends from angled up to horizontal. This gives me the possibility of a more stretched out, aerodynamic position on the bike, which is not especially comfortable but may help in wind. 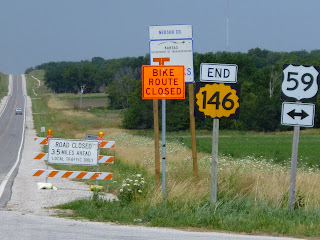 At Girard, I had a snack at the point where my fourth map section ends and the fifth begins. At Walnut, I had another, this time in the company of Miles, Andy and Alan. The locals told us about the road closure at Shaw, which I already knew about from Dale Young's journal. A bridge has been demolished for reconstruction, making it necessary to detour via US 59-N and SR 39-W. This brought us into Chanute at the north instead of the south end of town and increased the overall distance a little to 97 km.
Posted by Aldernath at 12:49