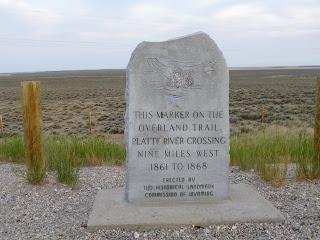 Yesterday's weather forecast indicated that the wind from the SW would last two more days and become a westerly on Friday. My tentative itinerary called for a ride due west on Friday into Lander. To avoid a hard day into the wind, I thought it a good idea to reorganise the coming three stages into two days of one and a half stages followed by a rest day in Lander on Friday. 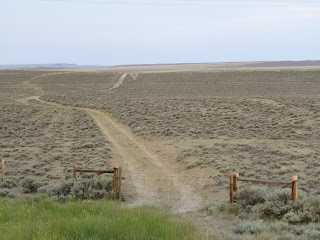 The feasibility of that plan depended on the wind today. From Saratoga, the route goes north for 33 km to Walcott then west for 33 km into Rawlins. I knew from Andy's blog that the westward section had caused the Brits a lot of grief yesterday. However, they had started it at about 10:30am. I hoped to be there earlier when the wind would probably be lighter.

I left Saratoga at sunrise, 5:35 am, and turned the corner at Walcott at 7:20 after having a snack at the gas station there. Most of the westerly section is on an interstate highway, the only one on the TransAm Trail and one of the few in the country where cycling is allowed. There is a good wide shoulder and although I kept to the right-hand edge of it, most trucks still moved over to the left lane as they passed me. 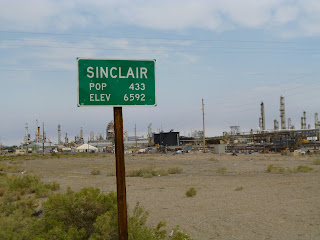 After 22 km, the route leaves the interstate to pass through the oil refinery town of Sinclair. The town was built by the Parco oil company in 1925 and sold to the Sinclair Refining Company in 1934. The architect's brief was to design a company town that was aesthetically pleasing as well as functional. Its name was changed from Parco to Sinclair in 1942. The company sold most of the town to local residents in 1967. It is still dominated by the refinery but the architectural highlight is the Spanish Colonial style Parco Inn.

I had no problem with the wind and soon arrived in Rawlins, where my seventh map section ended and my eighth began. Saratoga to Rawlins is a standard stage on the route, albeit a short one. Given my concern about wind on Friday, I decided to implement my plan and go further, perhaps to Lamont. It is north of Rawlins, so there should be no problem getting there even if the SW wind strengthened. Harm, the Dutch cyclist I met on my way to Walden, had recommended to me the tepee accommodation there. I knew from Thomas's blog that he and Abi had also stayed there and liked it. 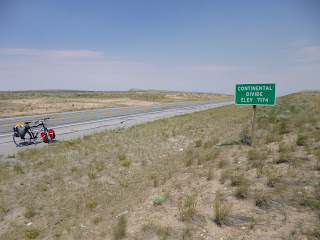 There were two crossings of the Continental Divide today, neither challenging.

There was moderate truck traffic on the road so I had to ride on the shoulder, which, as I drew closer to Lamont, deteriorated in quality.

I arrived in Lamont simultaneously with Adam, a rider on the ACA Great Divide mountain bike route, who had temporarily abandoned it, because of wind, to ride on the road. We ate lunch together in the cafe. Adam told me that straight after Lamont the shoulder improved immensely and that at Muddy Gap, 18 km further on, most of the traffic turned off the route.

It was now about 1pm. There was nothing and no-one in Lamont. If I stayed there I would have a dull afternoon. I decided to continue to Jeffrey City, 54 km further on. That would make today a full two stages.

Soon I met Brian, cycling from Oregon to South Carolina. He confirmed what Adam had already told me, that the three Brits were a few hours ahead of me on this road.

At Muddy Gap junction, I drank a quart of Gatorade and turned west for the last 36 km to Jeffrey City. It was 2:30pm. 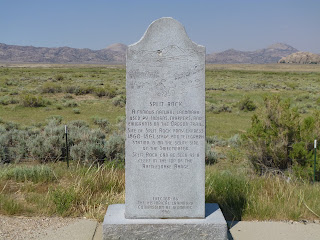 I arrived there just before 5:45, worn out after battling winds from the west -  no longer the south-west - of 32 km/h with gusts to 50 km/h. Twice I was blown off the road although I managed to stay upright. A couple of times I dismounted and walked for a minute, the force of the wind being too strong to allow continued pedalling. Much of the way was on a slight uphill gradient. The temperature was about 30C.

I had drunk a fair amount at Rawlins, Lamont and Muddy Gap as well as from my own water bottles but I was still dehydrated when I arrived in Jeffrey City. I drank a lot in the cafe there and continued drinking water all evening.

After eating a meal at the cafe, I went to the First Baptist Church, which allows cyclists to sleep in its hall. Alan, Andy, Miles and an eastbound cyclist, Ron, were already installed there. There is hot water but no functioning shower.


View Week Seven in a larger map
Posted by Aldernath at 16:58