The forecast was for isolated morning thunderstorms. When I emerged from my motel room in Eureka at 6am, the sky was filled with dark clouds. The air was warm and humid. But I was headed west and the weather system was moving in the opposite direction. In time the sky turned blue.

The first 30 km of the 119 km to Newton was on US 54, the road I had come in on, much used by trucks. I made the best time I could, trying to get clear of this section before the trucks got on the road or a thunderstorm hit. This part of Kansas is known as the Flint Hills and is rolling not flat. It took me an hour and three quarters to get to the turnoff at Rosalia.

My route information reported a restaurant in Rosalia and I was looking forward to a slap-up breakfast. However, the restaurant was closed and a local resident told me it didn't open till 11am. I carried on resignedly to the next town.

On the way, I met Alex, a young British cyclist riding from Los Angeles to New York City via San Francisco, Yosemite, Death Valley, Las Vegas, the Grand Canyon, and Washington DC, raising money for charity. We were able to talk quite comfortably on the edge of the road since, once off US 54, the rest of the day's ride was beautifully quiet, almost free of traffic. 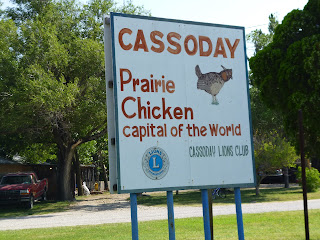 I reached the gas station at Cassoday, self-proclaimed 'Prairie chicken capital of the world', as the breakfast items were being cleared away. I was just in time for the last serving of biscuit and gravy. Miles arrived as I was leaving. After a (probably leisurely) meal, he caught me up 30 km further on, surging past at a tremendous speed.

My next adventure was an encounter with a swooping bird. It dived at me about ten times while I cycled through its territory. Unlike an Australian magpie, it didn't hit me but came very close. It was light brown and white in colour with a distinctive division in its long tail feathers. Does any reader know what it is likely to have been?

Finally, I met Randy from Roanoke, VA. He was at the side of the road fixing a puncture. He is heading for Astoria, OR and riding shorter stages. He camped last night at Cassoday.

Today's was a long ride in hot conditions (rising to 32C in the afternoon) and I almost drained my three water bottles as well as a Gatorade at Cassoday. The wind was from the north and provided some cooling.


At 7pm, as I was walking back from dinner, I spoke briefly to a fully-loaded touring cyclist heading east out of Newton. By accent and appearance he struck me as a northern European. The temperature was still 30C, the wind from the NNE at 19 km/h, and sunset two hours away. He had 60 km to ride to Cassoday, the first place with any services.
Posted by Aldernath at 14:09