I arrived at the Moose Creek Cafe in Walden right on opening time at 6am. Three customers were already inside; within five minutes there were twenty. All were men in baseball caps. Service was efficient and I hit the road at 6:25 after eating a full breakfast.

I have been fortunate in Colorado not be affected by the wildfires that are sweeping the state. There have been many road closures and population evacuations but none directly on my route. I have also been lucky with the weather. I expected that in the high country I would be shivering in my warmest clothes from late afternoon onwards. In fact it has remained comfortable all evening and I have not needed anything beyond the lightest summer wear. 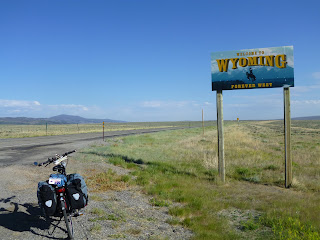 I rode to the end of North Park and over the hill to the new country beyond. After a while, I entered my seventh state, Wyoming. Here the land is vast and empty. Big skies, deserted roads, just me and the bike.

My route through Wyoming falls into two parts. In the south, where I am now, the dominating factor is the wind. Its strength and direction determine whether the riding is quick and easy or protracted and painful. Today, for example, the wind was from the SW. I was riding mainly north, which was fine, with two segments heading west, which was less fine. Nevertheless, I covered the 108 km to Saratoga at an average speed of 21.5 km/h, which I regard as excellent.

In the second, northern part of Wyoming, beyond Togwotee Pass (2,943 m above sea level), lie the great national parks of Grand Teton and Yellowstone. Here I can expect spectacular scenery, high prices, and hordes of holidaymakers driving or towing vehicles (RVs, caravans) with whose width and handling characteristics they are unfamiliar. 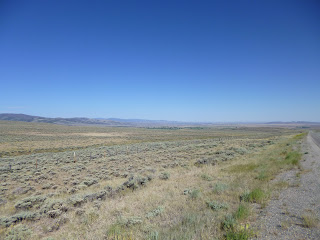 The roads in Wyoming will be worse than any previously experienced on this trip. Up to and including Kansas they were nearly always first class. Colorado's were marked by cracks running the full width of the road every few metres which acted like isolated rumble strips. Bike and cyclist were constantly being jolted up and down. Wyoming's roads were fine today but I know from other cyclists that that will not last. Services in this state are generally far apart and on many days I will need to carry enough food and water to last until my destination.

Not today though. After crossing Canadian River, North Platte River, and Encampment River, I paused for second breakfast in the village of Riverside. The terrain was rolling with one long hill. My destination, Saratoga (elevation 2,068 m), lies on the North Platte River.