The first 12 km this morning were still on the eastward road. This reminded me of one compelling reason to favour a westbound TransAm, except on days like today: in the mornings, when cyclists are on the road, you – and the truck driver behind you – are not blinded by the sun. 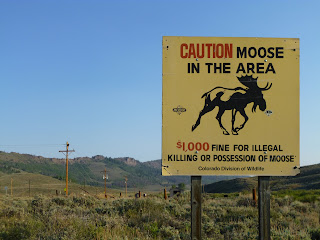 I turned north onto Route 125 and began the long slow climb to Willow Creek Pass (2,932 m above sea level), the third and last mountain pass on my route in Colorado. There was more climbing than I expected since in the early stages there was also plenty of downhill to take away the gains.

I followed Willow Creek back up the mountain between steep hillsides of dead trees. They shadowed the road, leaving it cool for longer than usual. Most days I can remove my second layer of clothing by 7am.

I finally emerged into sunlight and stopped for a moment. Just then, Mark from Arizona appeared from ahead. He is cycling from Florence, OR to Yorktown, VA.

Cheered as always by meeting another touring cyclist I continued up to the pass. There I met several members of a week-long supported bicycle tour organised by Colorado HeartCycle. Some had already hurtled past me on their way down the road I was climbing. I in my turn was to hurtle past the stragglers as they pedalled up the other side of the pass.

Three days ago I cycled through South Park to Fairplay. Now, at the foot of the pass, I found myself in North Park. No cute cartoon characters here, just a bowl of lush grassland ringed by mountains.

There were no services on today's 98 km ride to Walden. At the only place on the way, Rand, which has a post office and not much else, I stopped and ate a snack from the supplies I was carrying.

Soon afterwards, another eastbound tourer came towards me. My first words to him were, 'Are you Harm?', for Mark had told me to expect a Dutch cyclist of that name. His first words to me were, 'Are you Dutch?', for he had spotted my Axa ring lock. This was the longest of my three conversational stops this morning. I was able to update him on Mark's movements. He told me he had met Miles yesterday. In this way, news of other riders travels up and down the line. 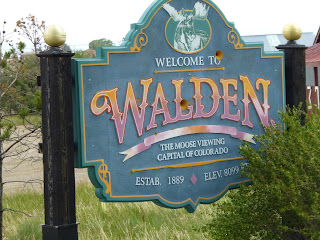 The last quarter of the ride through the Arapaho National Wildlife Refuge (none seen by me) was fairly flat and went quickly as I still had the wind with me. I found the inexpensive Westside Motel in Walden (elevation 2,469 m). In the evening, I had a superb three-course meal at the River Rock Cafe.
Posted by Aldernath at 13:31