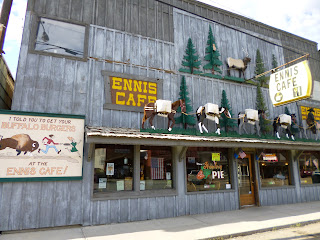 Today's ride was exactly the same length as yesterday's, 114 km, but tended uphill where yesterday's tended downhill, and today's began with a corker of a hill. To prepare myself for it, I had breakfast at the Ennis Cafe, which opens at 6am even on a Sunday.

The big hill began soon after leaving Ennis. As I started up it, a group of ten deer including calves moved away. I later saw a solitary pronghorn. After an hour and a half of steady grinding in a lowish gear, I reached the unnamed pass at the summit. I put on my wind jacket for the descent, then realised I was at a false crest. I had another fifteen minutes of climbing still to do. The true summit (elevation 2,124 m) is 16 km from Ennis.

There was a fabulous long 7% descent, which may have been the grade of the uphill too. I came down through Alder Gulch to the Ruby Valley, another beautiful stretch of country framed by mountain ranges to left and right. As I progressed, a third mountain range loomed up ahead. I knew that before I got there the range on the left would end, allowing me to turn in that direction into the next valley.

I stopped to buy second breakfast at the IGA in Sheridan, my halfway point for the day, then continued to Twin Bridges, where after crossing the river I turned into the small park to look at the bike camp, a facility provided by the town for touring cyclists. Nearby I met Robert, a local resident and lifelong cyclist – the only one in town, he said. We had a long conversation during which he told me that in 1955, at the age of 14, he became the youngest person ever to have cycled across the United States. He cycled competitively for years and still rides a good distance every day.

Now I turned south and rode for two hours in what seemed the wrong direction for someone heading north. I was in the Beaverhead Valley, important historically for the rendezvous at Beaverhead Rock in August 1805 of the Lewis & Clark expedition with the Shoshone from whom they wished to buy horses.

Robert recommended that in Dillon I eat at the Fiesta Mexicana taco bus. Although I didn't realise it until I'd checked in, it is located next door to the motel I'm staying at. I know where I will be eating this evening!
Posted by Aldernath at 14:44