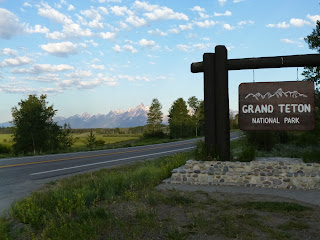 Most of this morning's 63 km ride was in the Grand Teton National Park. I took the left fork at Moran Junction, the road towards Jackson, which followed the course of the Snake River. At one point I passed an access road that went down to the river at a grade of 19%.


Beyond the river was the Teton Range, which I was riding parallel to. The road had a reasonable shoulder and traffic levels were light. Every so often there was a turnout that allowed me to stop, admire the view, and take a photo. There were overlooks of the river, of Grand Teton (the highest peak), of a glacier. The scenery all around was magnificent.

I came to Moose Junction and all of a sudden saw a bike path on the east side of the road. This was unexpected since it is not shown on my map. I asked one of the many cyclists on it whether it led to Jackson. On being assured that it did, I followed it the rest of the way. Tomorrow, I will return on this path to Moose Junction then turn off today's road on an extension of the bike path as I rejoin the main route. 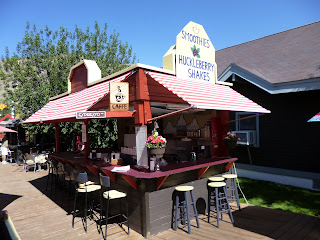 It was only 9:45am when I arrived in Jackson (pop. 9,600). It's outside the park boundary and a similar sort of place to Breckenridge, CO, an expensive tourist town dedicated to outdoor pursuits in summer and winter. Sebastian made me a huckleberry shake to restore my energy after the ride and I went for a look around.
Posted by Aldernath at 12:42