The TransAm Trail takes Route 269 from Hamilton to Stevensville and there joins a bike path alongside US 93 as far as Lolo. I had heard that the bike path has recently been extended all the way to Hamilton and decided to try it. I found it a little confusing at first as there is minimal signage. The path stops and starts and is sometimes indistinguishable from the sidewalk. At first it is to the east of US 93 and later to the west. For a km or two I found myself cycling on the shoulder of the highway as I couldn't identify a path on either side of the road. 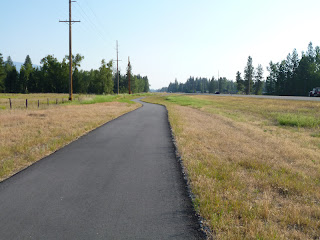 Eventually, however, the path settled down and delivered a pleasant, easy, safe ride. 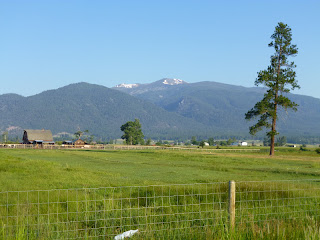 I cycled north through the flat Bitterroot Valley, the sun to my right lighting up the mountains to my left, which gradually became rounder and softer. At Lolo, after nearly 60 km, the bike path ended. Here my route to the coast takes me west, but first I was going to make a side trip north-east to Missoula. A 13 km spur along the edge of a busy highway brought me to the city (pop. 67,000), where a dedicated bike lane on quieter streets guided me through it. 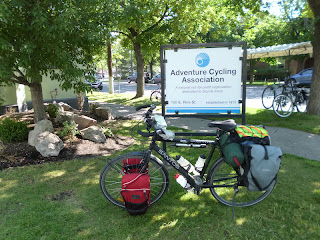 The ACA map led me all the way to the ACA headquarters in Pine Street.

Here I met Jennifer, the cartographer with whom I have been in email correspondence for months about real or imagined errors in the maps.

Today it was the turn of Derek, graphic designer, to receive visiting cyclists. He took my photo for the gallery, presented me with a bandanna, and showed me around the building, beginning with the cyclists' lounge. Its resources include maps, a computer, floor pumps, and free ice cream. There are photographs and other wall displays throughout the newly extended building and unusual or historically significant bicycles. Items from the Cyclosource catalogue can be browsed and bought.

I checked into a motel and did my laundry then headed to Caras Park on the river where at lunchtime on summer Wednesdays food stalls and live music are on offer.

Today's ride was 79 km. It brings the total for my ninth week to 625 km and the total since the beginning of my trip to 5,311 km. My ninth map section ends in Missoula. I will be taking a rest day here tomorrow.


View Week Nine in a larger map
Posted by Aldernath at 12:21