Astoria was my goal but not quite my turnaround point. With a day in hand I set off this morning for one final half-stage south to Seaside, where the other ACA route I have been following, the Lewis & Clark Trail, has its official finish. Since I was returning to Astoria the same day, I left the bulk of my luggage behind. I expected this to make me jet-propelled but the bike didn't go any faster. It rolled along at its usual pace, worn out perhaps by its exertions over the weeks. 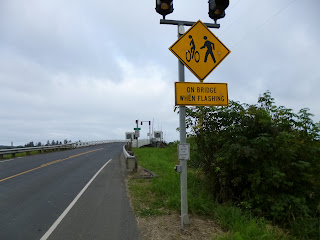 I came to the Lewis and Clark River, where I had to press a button to set some lights flashing. This alerted motorists coming behind me that there was a cyclist or pedestrian on the shoulderless bridge.

Fort Clatsop was not yet open on my outward journey so I visited it on the way back to Astoria. It is a replica, built in 2006 on the original site, of the wooden stockade in which the Lewis & Clark expedition passed the winter of 1805-06. There is a visitor centre where I watched a 20 minute documentary film. A fully-loaded touring bike was parked outside but I didn't spot its owner.

After all the highway riding from Portland onwards, it was a pleasure to cycle on traffic-free roads today. Perhaps because of the quietness around me, I had more of a sense of an ending today. Coasting down the final 100 m hill and then riding along the beachfront promenade towards the Lewis & Clark statue I could see in the distance, I felt that the journey was complete.

Today's ride was 35 km each way. At the turnaround point in Seaside, my total distance from the start was 6,484 km.


View Week Twelve in a larger map
Posted by Aldernath at 14:42