I'd been looking forward to today's 59 km ride because I knew it would be particularly beautiful, climbing up high and passing spectacular waterfalls. The route starts on a state trail (bike path), continues on the I-84, then goes for 40 km on the HCRH, which I wrote about three days ago. Work has begun on extending the bike path to eliminate the need to cycle on the I-84. 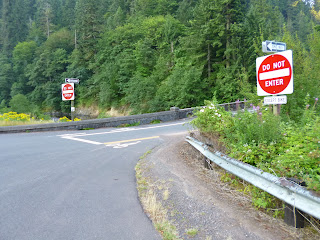 The state trail out of Cascade Locks ran for about 4 km until it reached a fish hatchery. Where to go from there? I explored every road and path around the complex junction except the correct one. At last I found a local person and he told me. Silly me had failed to notice that the freeway exit ramp with its large and prominent 'Do not enter' and 'Wrong way' signs carried a subsidiary sign saying 'except bike'. That was the way I had to go. It's obvious once you know. 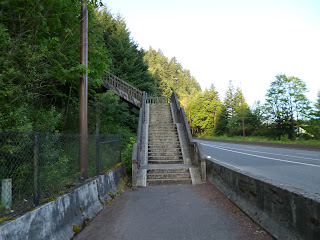 It brought me to the infamous stairwell, where six flights of steps have to be climbed. There is a grooved ramp for bike wheels but pushing a fully-loaded touring bike up a 45 degree slope is beyond me. I removed the four panniers, carried them up the steps two at a time, then pushed the bike up and reloaded.

As I rode along the I-84, I could see the first part of the bike path extension alongside. It is already usable for some way. Once on the HCRH, I wound my way slowly up the hill past one waterfall after another, each with its car park, viewing points, and walking trails. The highest is Multnomah Falls, with a drop of 189 m. It has a visitor centre, cafe, gift shop, and restrooms as well as the standard amenities.

The road started to climb more seriously and took me into cloud. At Vista House, a 1913 rotunda near the summit celebrated for its views, there was no view at all.

The descent took me away from the Columbia. A new river, the Sandy, appeared on my left and I followed it to a crossing at the entrance to Troutdale. This is regarded as the endpoint of the gorge.
Posted by Aldernath at 12:16