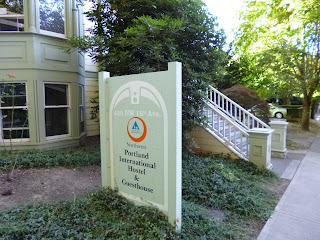 On 1 August I cycled the last 50 km from St Helens into Portland, bringing my grand total to 6,681 km. I stayed three nights at the excellent Northwest Portland Guesthouse, where I used a hose at the side of the main building to wash soil and plant material from my bike, something I had to do to satisfy Australian Quarantine requirements. The next day I took the bike to the downtown branch of the Bike Gallery, where I had booked it in to be packaged for my flight home. Josh and Simon did a thoroughly professional job.

Jan, a friend in Canberra, had put me in touch with her cousin Klarice, who lives in Portland with husband David. They looked after me marvellously well during my stay. Their many kindnesses included storing the boxed bike in their garage until my departure and driving me and all my baggage to the airport. I purchased a duffel bag at REI to hold my tent and three of my panniers The fourth pannier I used as my carry-on bag for the flight.

At Portland airport, where I checked in at Alaska Airlines, my boxed bike was found to weigh 52 lbs (23.5 kg), a little over the 50 lb limit and a kg more than on the outward journey. I was, however, not asked to pay extra. After check-in, I took the bike to the oversize baggage area for loading. Given the damage caused on the outward flight, I was horrified to be told the box would be opened for physical inspection. I was permitted but not required to be present while this was done. The TSA agent removed much of the packing material in order to probe the depths of the box at several places with an explosives-detecting wand. Afterwards she put everything back in and taped up the box. The bike was in good condition when I reassembled it in Canberra.

To date, I have raised over $1,900 for Operation Smile through donations made via my blog to one or other of the two linked sites. That is enough to provide free surgery to six children whose clefts would otherwise remain untreated. I have been notified that the Australian donation site will be taken down 45 days after the end of my ride, so there is still time to contribute. [On expiry of the 45 days, the total raised was $2,205 (lumping Australian and US dollar amounts together), enough to treat seven children and equivalent to 33 cents per km cycled.]
Posted by Aldernath at 23:06