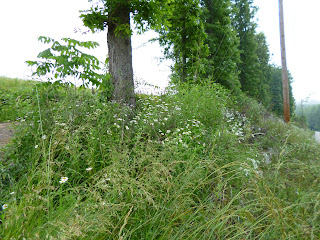 Today was our last in these mountains and a shorter one (79 km). The three of us lingered over our morning coffee, slow to get going. Don and Dottie have allotted more time to their cross-country trip than I have and are likely to take a rest day in Berea, so I may not see them again. They have been excellent company in the three days we have spent together and I will miss them. 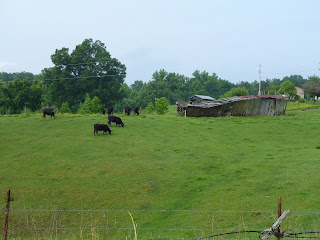 The hills were not so long today but some short pitches were very steep. In my lowest gear, I pumped furiously at the pedals trying to reach the top before my heart and lungs exploded. The last one came too soon after its predecessor, before I had fully recovered my breath. I had to dismount and walk up part of it. There was little traffic until quite close to Berea (pop. 14,000), no coal trucks, and no dog chases – just barking. Rumble strips, where they occurred, were mainly narrow and deep, impossible to cycle on, and without the gap every 10 m to allow safe crossing by cyclists that we are used to in Australia.

I stopped in McKee for second breakfast of biscuit and gravy, a common dish here though exotic to non-Americans, and again in Sand Gap for a drink. I had good conversations with the staff in both places. That was more or less the end of the climbing. A tremendous 3 km, 6 percent descent on a good wide shoulder took me to the village of Big Hill and the turnoff to Berea.

There has been a steady reduction in the average level of affluence as I have moved from the coast into the interior. The narrow mountain valleys of the Appalachians are obviously poor. There are some attractive houses but many people live in trailers or poorly-maintained shacks. I was told that unemployment is high and drug misuse common. The economy here is not flourishing.

My route is covered by 11 map sections and I have 12 weeks to ride it. At the end of my second week, I have completed the second map section and cycled 1,127 km. I am making very satisfactory progress.