I woke to thunder, lightning and rain. When the storm cleared, I tried unsuccessfully to catch on camera the two hummingbirds that flitted around the feeder on the front porch. After a good breakfast, I thanked my hosts for their generous hospitality and set off down the lane back to the road. I'd been cycling for half an hour when a new storm struck. Thunder and lightning were all around me; heavy gusting rain lashed the bike. I had to get off the exposed road. There was no suitable shelter. For want of an alternative, I crouched by a clump of trees. It was less than ideal. I remained there for three quarters of an hour until it was safe to proceed.

I rode on some way until, soon after I left Fordsville, a new electrical storm struck. There was a gas station ahead and I took refuge there, nursing a coffee for an hour and a half while the storm raged outside. For part of the time I talked to another customer, Loyle, who lived close by. He kindly invited me to camp in his yard if the weather stopped me going further today. When the sky lightened in the direction I was heading, I set off. By the time I reached Whitesville, the rain had dwindled to almost nothing. I still had most of the day's ride in front of me but this was the last place I could get a meal. I knew if I didn't eat now, I would regret it later. When I emerged from the diner, the clouds had gone and the sun shone.

I reached Utica, my fallback destination for the day. Cyclists are allowed to stay in the fire station there. I telephoned my preferred destination, the First Baptist Church in Sebree, and left a message that I would like to stay in their cyclist hostel tonight. Then I set off again. When the sky in front darkened and the wind picked up, I wondered if perhaps I should have stayed in Utica. There was only a shower and then the sky cleared. After 118 km, I reached Sebree at 5pm and was welcomed at the church by Jason. He showed me around and said the pastor and his wife, Bob and Violet, would feed me at 7pm. I had struck lucky again.

There were three dog chases today. My tactic was to yell, 'Stay!' and keep pedaling.


Cyclists Thomas and Abi arrived from Rough River Dam an hour after I did. The three of us shared a mountain of food with Bob and Violet and their guest Glen. I asked if there was a way to make a donation to support their work. The answer was no but thank you. 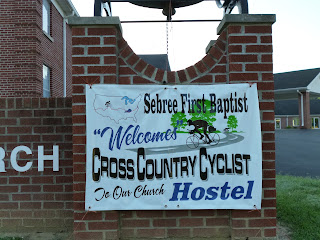