Perhaps I should have taken a rest day in Radford. Today I had no energy. My legs ached with every uphill pedal stroke. I stopped frequently to rest, drink and snack. By happy chance, at one of these stops, two TransAmers I had not met before, Ed and Jill, caught up with me. Ed is from Alabama, Jill from Virginia, and Ed's wife Cathy is driving a support vehicle. They'd heard about me from the British trio. Naturally, being without panniers, they were faster than me, and all the more so as I was having a bad day. Nevertheless, we found ourselves together quite often on the way to Wytheville. Maybe they were deliberately hanging back in case I needed assistance. If so, I am very grateful as their destination for the day was at Troutdale, further on than mine. At one point, we found a store and sat around a table for a while. After consuming a Gatorade and pastry, I felt a little stronger.

Adventure Cycling did another great job in mapping a route without traffic. Of today's 67 km, only the last sixteen had any significant motor traffic – but that consisted largely of container trucks. Either Wytheville (population 7,700) has a huge quantity of deliveries or the trucks were taking a short cut somewhere. Right at the end, I saw the motel I had booked into, ahead at the top of a hill. Nearly done! I just had to get there. Gasping up that last hill, I heard a container truck revving its engine close behind me. It couldn't get past and I couldn't get off the road to let it through as I had done with others earlier. Eventually we both got where we wanted to go.

Earlier, soon after leaving Radford, I saw one of those small deer I mentioned yesterday running towards me on the opposite side of the road. It was trying to escape a following car, which must have slowed to avoid hitting it. At last, the deer found a way off the road. I noted the spot and when I reached it looked for the deer. I saw nothing but heard a crashing in the undergrowth. 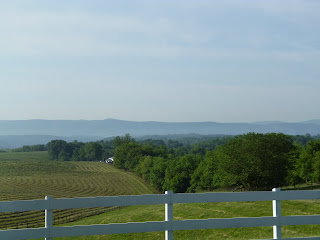 I had hoped to ride to Damascus tomorrow and possibly have a rest day there. It is situated on the Appalachian Trail and looks an interesting small place (pop. 1,000). However, Jill told me that the third weekend in May – beginning tomorrow – is the annual Trail Days festival in Damascus, when thousands of AT hikers and former hikers pour into town. Accommodation will be scarce to non-existent although she thought I would find a small space for my tent. I think I'll wait till I get to Troutdale tomorrow, 59 km from where I am now, mainly uphill. If I'm feeling strong I'll go on to Damascus, a further 40 km, much of it downhill. Otherwise, I may stay the night in Troutdale.

There is another reason why today was not my best of the trip. My GPS receiver ceased to function. At the end of yesterday's ride, I had difficulty turning it off. This morning it wouldn't turn on. The batteries were newly recharged but I swapped them for fresh ones. It still wouldn't go on. I think the problem lies with a faulty power button. If I remember correctly, I bought the unit late last year from Wiggle, a well-regarded internet retailer of cycling kit based in the UK. I used it maybe 10-20 times in Australia then every day last week. It's disappointing that control of manufacturing quality is so poor. These hi-tech products are nothing if they're not reliable. Fortunately, I have the paper maps and, in Virginia, the Rt 76 road signs. But I valued the GPS information and will miss it. If among my readers there is someone knowledgeable about the Garmin Oregon 450 who is able to advise me what I can usefully do with it, other than jettison it to reduce weight, I would be grateful.
Posted by Aldernath at 13:01