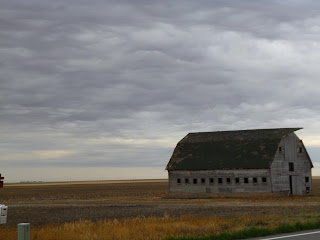 I was woken by a storm at 5am. Later, at breakfast, an elderly farmer said, as they always do, 'We need the rain'. I set off later than usual, at about 7:30am, a few drops of rain still falling. Within an hour it cleared away. 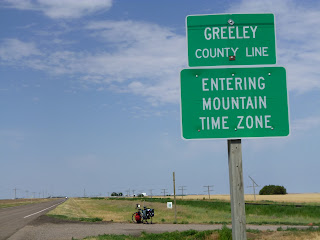 Yesterday evening I thought of riding a double stage again today, if I wasn't too stiff from the last one, since the forecast was for an easterly wind, but when I checked this morning only cross winds were expected. I therefore set my sights on the usual next stop, Tribune, 75 km away. I broke the journey halfway at Leoti for second breakfast. A little later, I passed from the Central to the Mountain time zone, putting me 16 instead of 15 hours behind Australian Eastern Standard time.

As I rode, I couldn't help noticing that I had a tailwind. At Tribune I had lunch. The woman who served me said she thought rain storms were coming from the west and I should check the weather if I was thinking of going on. I got out my computer and checked. The forecast for the next six hours was for partly cloudy skies and winds from the NNE or NE. That was just what I wanted. Because of the clock change, it was early. I couldn't face just checking into the motel at Tribune and wasting the favourable wind. I got back on my bike. 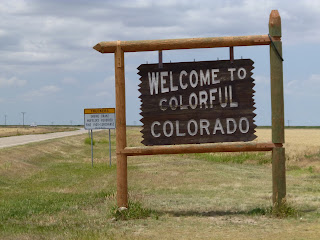 It was another 93 km to Eads with one service stop along the way, where there was also the possibility of sleeping in a church-provided lodging for cyclists, should the weather turn bad or I run out of energy. After Tribune the traffic dwindled almost to nothing. Could that have been due to its being Saturday afternoon?

I cycled out of Kansas and into Colorado, my sixth state. At the state line, I met Jameson and Laurel, cyclists heading east. Later, I met British cyclist John, also heading east. The ground cover changed to a grass better suited to low rainfall. At Sheridan Lake, I had a snack and a drink, then pressed on to Eads.

The total distance I cycled today was 167 km. Thus I have completed back to back imperial centuries: more than a hundred miles on successive days, riding a fully-loaded touring bike on a slight uphill gradient, albeit with wind assistance. Had the wind been from the west, it would have taken me four days to cover the distance I have come today and yesterday. My average speed today was 21.8 km/h with the afternoon being faster than the morning.
Posted by Aldernath at 15:49