With a warm day in prospect (forecast 30C), I was on the road not long after 6am. I stopped for breakfast at Doe Run, a cold drink at Pilot Knob, and lunch at Centerville, ending the day at Ellington for a total of 96 km. The first half of the ride was on roads that would have been busy on any day but Sunday. Despite the reduced traffic volume, I thought it prudent to ride on the shoulder, where there was space to the right of the rumble strip. To remain within this 50 cm grit-strewn lane, however, required more concentration than riding on the road proper, which I would have preferred. Most of the route felt less hilly than yesterday's. The exception came after Johnson's Shut-Ins State Park, where there was a section on Route N that had some brutally steep, short hills. 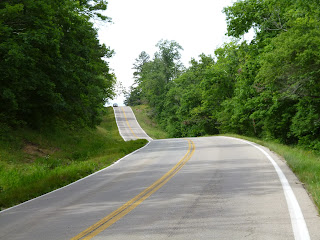 Shortly before Centerville, I met my first eastbound cyclists, Tom and Alvon, riding with a support vehicle as part of the Sea2Sea project. It's early in the season for cyclists who started on the west coast to get this far. The passes through the Rockies are blocked until quite late. These riders told me they came over Lolo Pass in a snowstorm. Our conversation was conducted with the three of us spread out in a line along the edge of the road as cars whizzed past. There was no opportunity to get off the road and chat safely.

A little later, I was joined at lunch in Centerville by David, a resident of SW Missouri who knows Australia. He was headed home on his motor scooter.
Posted by Aldernath at 12:31