Thanks to the sleepover in Guffey, I felt stronger this morning, better able to cope with the lower levels of oxygen in the air. After coasting back down to rejoin Route 9, I began the climb to Currant Creek Pass (2,866 m above sea level), the first and lowest of the three passes I have to cross in the Colorado Rockies. Tomorrow's is the biggie. There was less traffic on the road than yesterday, making me think that US 50 had reopened. 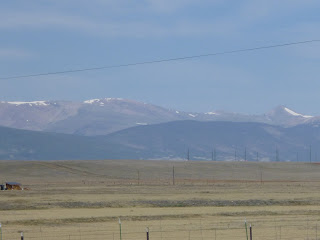 The pass was unmarked. Cresting it brought a new vista, with a range of snow-capped mountains in the distance. The descent on the far side was a blast. The road undulated through an empty landscape. I followed it to Hartsel for second breakfast.

I continued to Fairplay (elevation 3,034 m), climbing gradually through a high grassland basin watered by the Middle Fork South Platte River. This area is South Park, well known for the animated television series of the same name set here. A cross-wind got up and blew me about in the last three quarters of an hour or so. Distance for the day was 74 km. 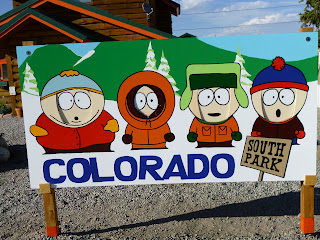 In the afternoon, I visited South Park City, a museum in Fairplay. About forty original buildings from the late 1800s have been brought to a single site and filled with period artefacts to provide a representation of one of the mining towns that sprang up in the area. It is done very well and I enjoyed the visit.

My fellow guests at the Hand Hotel B&B included a number of hill walkers. I learned from them that Colorado has over fifty fourteeners, that is, mountain peaks over 14,000 feet in height. The exact number depends on the definition. Most if not all can be walked up without technical climbing skills. Climbing every one is a popular pastime, akin to Munro bagging in Scotland.
Posted by Aldernath at 11:33