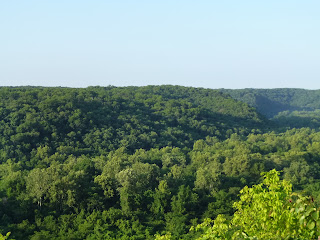 The killer hills continued as far as the long climb out of Alley Spring, then moderated in gradient. I started to enjoy the ride again. I cruised to Summersville for second breakfast and finished in Houston by 11am with 67 km under my belt. I would have gone further but there is no suitable overnight stop closer than the end of tomorrow's stage. 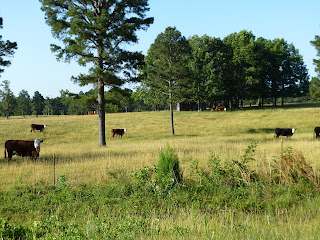 I am not done with the Ozarks yet but yesterday and the first hour today were harder than anything I experienced in the Appalachians. This is despite the fact that my cycle fitness has improved since then, as evidenced by the ballooning of my calves. The climbs are shorter here but steeper and more numerous. They require significantly more effort to get up them.

My spirits always rise when I meet another touring cyclist. They were already high, thanks to the more rolling nature of the terrain, when I met Dan shortly before Yukon. He is riding eastwards in segments, this year cycling from Pueblo, CO to Carbondale, IL. He said he had battled three days of east winds coming across Kansas. If only those east winds are still blowing when I get there! We balanced precariously on the edge of the road and exchanged practical information about the next two or three days for each of us. 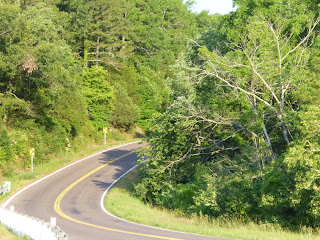 These roads are one lane each way with no shoulder. Traffic is fairly light but includes a high proportion of heavy goods vehicles. Vision of the road ahead is restricted by the crests and dips, twists and turns. There are few opportunities either to overtake or to pull over safely. I try to get off the road when I can to allow traffic behind me to pass.

As far as I know, I am the only westbound cross-country cyclist who will be in Houston tonight. I think that Thomas and Abi, Don and Dottie, Ed, and the British trio are all behind me, as are the ACA group. No doubt I will see some of them again somewhere along the route and before long I will meet new westbound cyclists. Meanwhile, I continue to explain my trip to a variety of curious non-cyclists. [Correction: It looks like Thomas and Abi cycled a double stage from Ellington to reach Houston today.]
Posted by Aldernath at 09:38