The three Brits were off by 5:30am to beat the wind into Lander. Still tired after my long day yesterday, I decided to eat breakfast first at the cafe. It was supposed to open at 6am but was still dark and shuttered at that time so I ate a Clif Bar and set off without a meal.

Soon I saw Andy riding back towards me. He had left his bumbag behind containing his passport and money. He must have been half an hour behind me when he left the church for the second time but still caught me before Lander, demonstrating how strong a rider he is.

There were no services on the route today except for a rest area at Sweetwater Station, about a third of the way along the 95 km. I stopped there to eat something more substantial from the food I was carrying. A truck driver presented me with four cereal bars. He said that the haze in the air was due to fires in Wyoming, not Colorado as I had supposed. It is the Colorado fires that are getting the media attention. 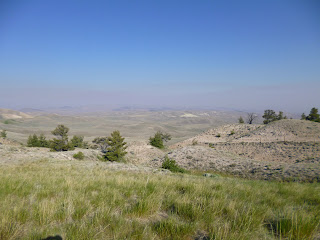 The road ascended to Beaver Rim from where there was a magnificent view across the valley to the Wind River Range. This came at the start of a splendid 8 km 6% downhill. There were also quite a few 6% uphills today, though none that long. 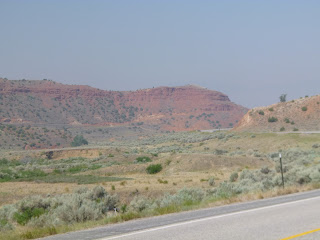 The whole ride was remarkable for the absence of wind. I pushed on in anticipation of a repetition of yesterday afternoon. When Andy caught up, he set the pace and I went a little faster than I probably would have on my own in my fatigued state. 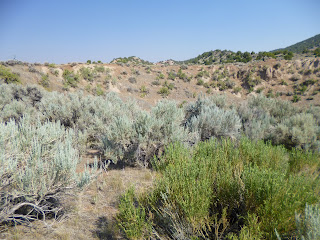 The wind started in the afternoon in Lander, at one point blowing at 42 km/h from the SW with gusts to 56 km/h. Fire appliances rushed through the streets at about 5:30pm, sirens wailing. They were unable to prevent the destruction by fire of the town's community centre. It's not known what caused it.
I am having a rest day here tomorrow.
Posted by Aldernath at 14:08