Eager to get going, I was waiting outside the Sunshine Cafe when it opened just before 6:30am. I thought I had better eat a proper breakfast since there are no services between Nickerson and Larned, 96 km away.

The wind was from the south again today, the prevailing direction. My route was due west almost the whole way, so I got no speed bonus. I toyed with the idea of emulating the British trio and doing a double stage today, given that there is a 30 km section headed north after Larned, but as I began to tire my average speed dropped and I abandoned the idea.

There was very little traffic. Apart from a few turns at the start and finish, the route was entirely on the one straight road, whose name changed periodically. It passed through the Quivira National Wildlife Refuge where I took the panorama shot above. Big Salt Marsh is on the right hand side.  The route also passed an artesian well marked non-potable. June told me that this water was formerly used for drinking. It was only when several babies became seriously ill that it was found to contain nitrates and removed from the supply. 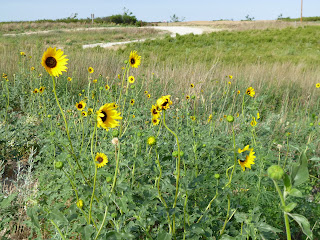 Thanks, by the way, to those who have added comments on my posts. I appreciate the feedback from readers. 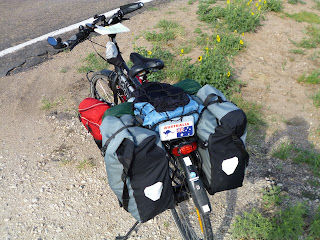 This is the end of week five, in which I cycled 688 km, bringing my total for the trip so far to a satisfactory 2,905 km.