After the first forty minutes or so, I was on Route 38 all the way to Marshfield. This was a beautiful road for cycling, gently undulating and with virtually no traffic. I just sat back, enjoying the greenery all around and the blue sky above, letting the bike ride itself. Occasionally there was a steep little hill to remind me of recent days. The only one worth mentioning is the climb to the junction with Route 95, beyond Graff. I stopped for refreshments at Bendavis and Hartville, where the cafe on the right has a cyclist logbook.

I also stopped for a chat with three eastbound cyclists, Jane, Patricia, and Ramona. There is a fourth member of their group, whose turn it was to drive the support vehicle. They left Astoria, OR on 1 April and hope to finish the ride in Yorktown, VA on Patricia's 70th birthday. They are raising funds to feed the hungry in the Seattle area. Blog here; fundraising here. 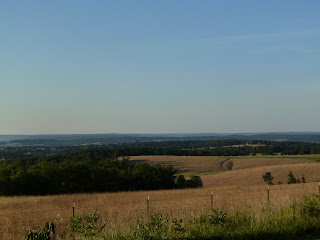 Today's ride was 107 km, slightly longer than necessary. At Marshfield, I first went to the Plaza Motel on the far side of the interstate highway. The elderly owner suggested I ride back across the interstate and stay at the Holiday Inn Express as there was nowhere to eat on her side of the highway and no wifi in her motel. I followed her advice. 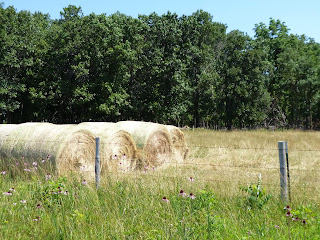 In this fourth week of the trip, I have cycled 588 km, bringing my total since the start to 2,217 km. I am still on schedule though I have no great margin for error. I gained a couple of days in Virginia that I have since lost. The challenge as I move from the mountains towards the plains will be to avoid losing significant time to headwinds (or other adverse circumstance).