The forecast for today was for a maximum temperature of 38C and winds from the WSW, the very direction I would be going. To beat the heat and the wind, I left the motel in Eads at sunrise, which in this eastern part of the new time zone was at 5:23am. I didn't have any difficulty waking up that early because my body clock was still adapted to the old time zone.

The distance to Ordway was 99 km. First stop, about a third of the way there, was at Haswell. Unexpectedly, because I had heard it was closed on Sundays, the small shop at the gas station there was open. I had a sandwich and a drink. The proprietor joked about the head wind I was facing. 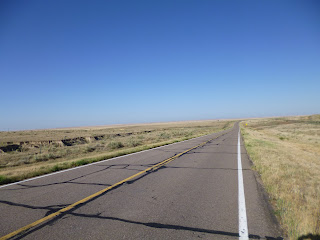 I continued. The landscape was empty. Scarcely a tree or a building or a cow could be seen. The road was not completely straight, as in Kansas, but wandered about, heading anywhere between south and west, the force of the headwind varying accordingly. The road surface in Colorado is rougher than in the previous states, full of scars and pits and regular jolts. Traffic was almost non-existent and I tended to cycle in the lane, where the surface was better, rather than on the shoulder.

I came to Arlington, known for the fact that its 'comfort station' contains a logbook for cyclists. I duly made my entry.

In Kansas, towns were usually recognisable by their water tower at a distance of 8 km, giving a target to be aimed for. Today, I saw the grain elevator at Sugar City when I was still 12 km away. I put my head down, adopted the aerodynamic position on my bar ends, and headed there. I knew the cafe was open on Sundays. There I had another of those delicious lunches offered by small independent diners: roast beef, mashed potatoes, green beans, salad, cherry pie, iced tea.

It was not much further from there to Ordway. My average speed today was 16.4 km/h, well down on the last couple of days.


In Ordway, I met Jack and Dale, young cyclists who are heading east on a route that is partly the TransAm Trail and partly their own creation.
Posted by Aldernath at 12:14