The hunting lodge is 2 km off the TransAm Trail, 1.5 km of it along a gravel road. I set off early from there for the 103 km ride to Pittsburg, Kansas. The only service area on the way is the town of Golden City, not quite halfway. This is no ordinary service stop, however. Golden City is the home of Cooky's Cafe, well known to cross-country cyclists for the variety and excellence of its pies.

The interval between hills quickly began to increase and their severity to decrease. Within an hour or two, the terrain was rolling so gently that the rises were barely noticeable. As I approached Golden City, I paused for a word with David, pastor of a church in the town, who said touring cyclists were welcome to shelter there in the event of extreme weather. He was out on his bike for exercise. 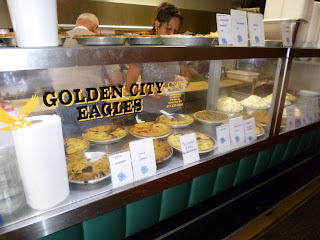 When I arrived at Cooky's, I learned that Thomas and Abi had eaten there last night and again this morning. I had missed them by twenty minutes. I had nearly finished my own breakfast, including a delicious slice of Dutch Blueberry pie, when Miles arrived, followed after a time by Andy and Alan. The three British cyclists camped at Ash Grove last night. 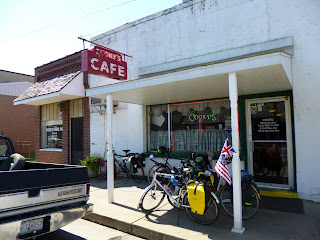 I started the second half of the day's ride, heading due west. There was a light wind from the south. I was nearly at Pittsburg when Miles caught up with me. He is much faster than I am and left the cafe half an hour after I did.

We reached the state line, crossed out of Missouri, and took photos of each other under the Kansas welcome sign. Minutes later, we were in Pittsburg and enjoyed a long, leisurely lunch at the traditionally-styled Harry's Cafe on Broadway, culminating for each of us in a large and tasty piece of lemon pie. 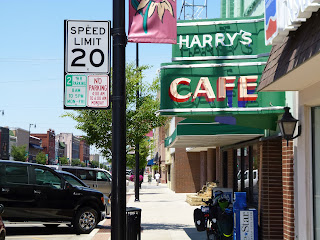