Lander (population 7,400) is a good place for a layover. Although the highway runs along it, its main street is pedestrian-oriented and contains everything a resting cyclist could want, including a bike shop.

The Holiday Lodge, where I am staying, is friendly and my room is comfortable. One thing I especially like is that it has a large, stable, well-lit desk with conveniently positioned power points. In many motels, there is no work surface, the only decent light is over the wash basin, and the only power point is in the bathroom.

I talked to a coach driver over breakfast. He has brought fifty people here from Utah for a four-day re-enactment of the Mormon handcart treks. In the 1850s, some Mormon migrants heading to Salt Lake City could not afford a horse or ox to pull a wagon. Instead they piled their possessions and smaller children into a handcart which they dragged across country themselves. They travelled about 8 km a day. Many families died crossing this high altitude semi-arid desert. In October 1856, one company was stranded in a blizzard near Sweetwater Station, where I was yesterday, until rescued by a party sent out by Brigham Young. 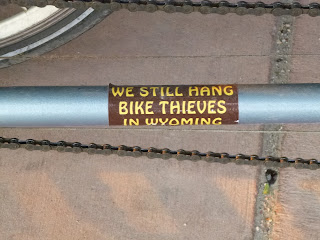 I've spent the day rather lazily, restocking my food supply, planning my stays for the coming week, and generally idling. With the temperature reaching 34C this afternoon, I preferred to stay out of the sun. 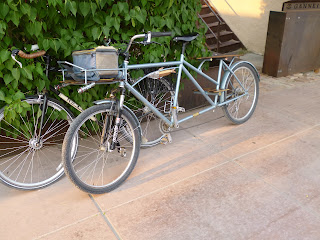