The sky was grey but my heart was light as I set off on the last leg to Astoria. After a warm-up flat section, the road climbed to Clatsop Crest (elevation 200 m) then descended in an up and down kind of way to Knappa where I ate my second breakfast.

Soon afterwards, I met Dan and Natalie, the first cyclists I have spoken to in more than a week. They are at the beginning of their trip, heading east on the Lewis & Clark Trail as far as Missoula, MT, where they will move across to the Northern Tier, leaving it in turn as they approach their destination in the New York area. 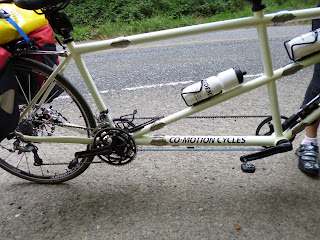 They were riding a cool Co-Motion Speedster tandem with a conventional chain and derailleur on the rear and a belt like mine transferring power from the front pedals to the drive. S&S couplings allow the frame to be split into three parts, packable into two cases.

The road continued to undulate. The Sunday morning traffic wasn't as bad as yesterday's and in time I came to Astoria. There is a column here somewhat similar to the one in Yorktown. It's at the top of a steep hill overlooking the town and the ACA have kindly not made it their finish point for the TransAm Trail, nominating instead the Columbia River Maritime Museum on the riverfront. I visited the museum later in the day and learned a lot from it.

This morning's ride was 58 km, bringing my total since the start to 6,447 km. I still have three days' cycling to do before I wrap up in Portland on Wednesday.
Posted by Aldernath at 11:51