The weather forecast was for light and variable winds today with a return to the usual headwinds tomorrow. This suggested to me that I should go further today and less far tomorrow. I set off a few minutes after sunrise on a bike path that began close to my motel in Umatilla and took me through town and over the river bridge to Washington. The reason for preferring the Washington bank is that there is less traffic. On today's stretch in Oregon I would have had to ride the interstate highway. 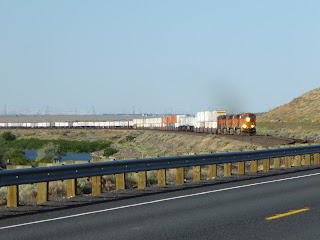 There is a railway line next to the road on both sides of the river. On the Washington side the freight company is the prosaically named BNSF Railway, formerly the more evocative Burlington, Northern & Santa Fe. The land on both sides is essentially desert.

For the first 40 km the river was like a mirror. Not a ripple disturbed its perfectly flat surface. I made good time on the bike. Then the wind began to blow and the water started to get ruffled. My average speed dropped.

The wind was still slowly strengthening when I met eastbound couple Michele and Steve from New Hampshire. They are cycling from Seaside, OR to Rye, NH and camped last night at West Roosevelt, WA. That was where I was due to stop if I stuck to my schedule.

I reached West Roosevelt after 82 km just before 11am. The store there was the only open service place I passed today. It incorporates a diner where I enjoyed a large and nutritious meal full of protein and carbohydrates, ideal fuel for continued cycling. I drank a quart of Gatorade and bought another quart to carry with me.

I had 56 km to go when I set off again after the half hour break. That would be slow and painful if I had to ride into a headwind. Happily, while I was having lunch the wind eased and didn't cause much problem. On the other hand the road now became much hillier and that had a similar slowing effect. My average speed over the day was 15.8 km/h.

After a final big climb, I turned off to cross the river back into Oregon. This time there was no separate bike way on the bridge and the shoulder was minimal. A sign warned of severe wind gusts. After a trouble-free passage I reached Biggs, which is a road junction and truck stop.
Posted by Aldernath at 17:09