There is a choice of routes out of Kamiah. I took the quieter, hillier option recommended by Adventure Cycling. That meant leaving US 12 for SR 162 and getting from Kamiah (378 m above sea level) to Winchester (elevation 1,213 m), where I intended to stop for the day. I began with a long steady climb out of the Clearwater Valley. It was 14 km at maybe 5% followed by a further 3 km of more gradual ascent. 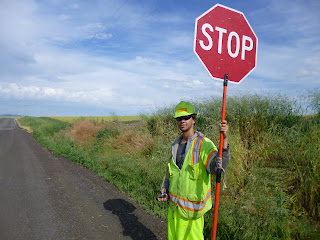 Road works were obviously imminent. Large sections had been dug up ready for fresh laying, leaving a rough surface that was not ideal for cycling. I'd gone a long way before I came to the area being actively worked. I was stopped while a dump truck manoeuvred and chatted to the lad holding the stop sign. 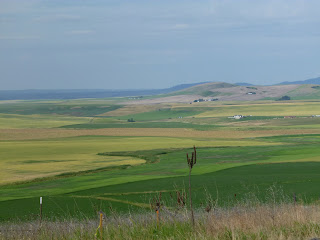 At the top I was in a new landscape, what the locals call prairie. Fields of crops were all around. I'm pretty sure some were wheat. Since Idaho is famous for potatoes, there may have been those too. The road continued undulating with a slight upward tendency. There was virtually no traffic and the cycling was very pleasant.

The route joined US 95 and became less pleasant. At first I thought this road was traffic-free also, which would have been good as the shoulder was closed: the first five km had been ripped up for resurfacing. Then, after several minutes, twenty or more large vehicles came thundering past nose to tail at tremendous speed. I think they must have been held at roadworks at a point before I joined the highway and now they were rushing to make up for lost time. This made them unusually intolerant of slow cyclists and I had more horn blasts in a few minutes than in the rest of the trip put together. Eventually I got back on the shoulder, which was not a good one, partially covered with loose gravel, sometimes concealing the rumble strip on the left, and littered with tyre scraps and broken glass.

At Ferdinand I turned off for an early lunch. Later, I turned off again at a viewpoint of some railway trestles and had a chat with motorcyclist Dan. After 28 km on the highway, I left it just before Winchester. At the turnoff I paused at a gas station for a coconut pie and a quart of Gatorade. 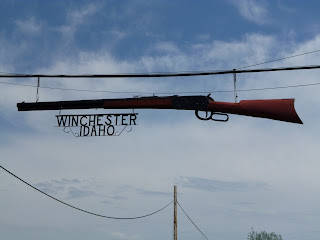 The motel in Winchester (pop. 300) where I had planned to stay was closed so I decided to continue. It had taken me the best part of seven hours to cover 72 km to get there. It was now 1:45pm. I had another 70 km to go to reach Clarkston. However, nearly all the riding had been uphill. From Winchester to Clarkston (elevation 246 m) would be mostly downhill with just one significant uphill on the way. 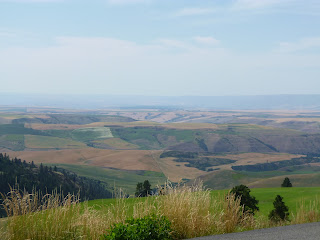 There was a huge and splendid descent early on. An immense valley opened out in front of me, its fields a patchwork of many colours ranging from yellow to gold to green to brown. The road twisted and turned tightly down the hillside, the left lane and occasionally the right lane edging on a steep drop. The view was wonderful.

At the bottom, at the village of Culdesac, I found myself back on US 95 for another 11 km, its shoulder no better than before. My map gave me another choice of routes. Again I chose the quiet and hilly one (the Hell's Gate option), just to get off the highway. Judging from the profile on the map, the new climb was about 240 m.

At the top I ate a banana and drank some water and then it was all glorious downhill. I swooped through the remaining km, coming at last to a bike path along the Snake River. At this point it forms the boundary between Idaho on its right bank and Washington state on its left. Twin cities, named after the two expeditionary Captains, Lewiston, ID and Clarkston, WA, face each other across the Snake. The Clearwater flows into the Snake at Lewiston. 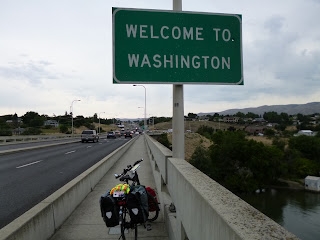 I crossed a bridge over the Snake (the 'wrong' bridge as it happens; I didn't notice there are two), entered my tenth state, and finished my tenth map section. I cycled 142 km in all and, apart from the time on US 95, had a wonderful day. For dinner I enjoyed a ratatouille at a fine Italian restaurant next to the Motel 6.
Posted by Aldernath at 18:17