I went back to the bistro for a cooked breakfast again, without company today, and so was a little late leaving. I hadn't gone far when I met Gary, who had been camping outside the town. He is on his way from Idaho to his home in Utah and has previously cycled several of the ACA's big routes: the TransAm, Northern Tier, Underground Railroad, and the western half of the Southern Tier. He will be completing the Southern Tier this year, beginning in late August. 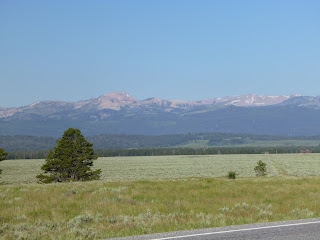 The ride of 114 km to Ennis was flat initially and then descended gradually. Early on, signs warned of bison and other wildlife on the road but I saw none.

For a long time the road followed the edge of Hebgen Lake, also known as Earthquake Lake from the manner of its creation in 1959. The quake triggered a landslide that blocked the Madison River, backing it up to form the lake. 28 people were killed. The scar left on the hillside by the landslide is visible today, 53 years after the event.

The road followed the Madison River downstream through a beautiful valley. I saw many people fishing from rowing boats.

I met British cyclist Colin on a five week tour from Seattle to Denver, a favourite route he has cycled several times. 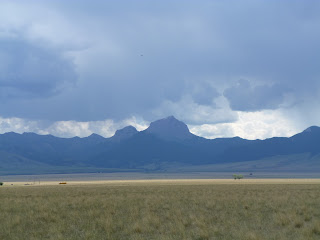 The valley widened and road and river parted company, meeting again just before Ennis. Clouds built up over the mountains to my right. 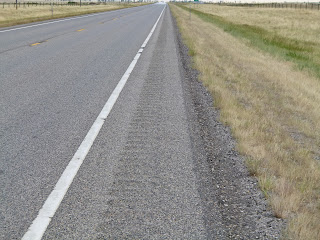 The ride would have been a total delight had it not been for the rumble strip that marred the last 30 km or so, badly placed in the middle of an otherwise good shoulder. The traffic was moderate but heavy enough that riding in the lane was not a sensible option.
Posted by Aldernath at 14:10