Today is Independence Day, Wednesday 4 July. I celebrated by cycling uphill for 65 km to my sixth crossing of the continental divide just before Grant Village. I've been spoilt by the past two days on the Teton Spur. They gave me the notion that this trip is about flat cycling on a segregated bike path. Today was a rude return to reality and I found it hard going.

I noticed yesterday in Jackson that my rear tyre was a little soft. I pumped it up and proceeded. On arrival at Colter Bay it was soft again. I had a slow leak but chose to do nothing about it, hoping the problem would go away if I ignored it. This morning I found I had to pump up the tyre every few km. I faced the fact that I couldn't go on like that for another four weeks. I would have to change the tube. 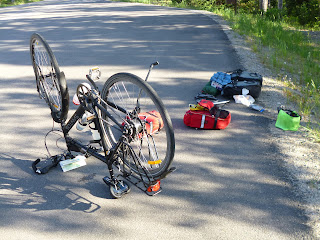 The operation took a mere 45 minutes from start to finish, a record for me. Folding tyres are much easier to remove and refit than beaded tyres. For the first time I succeeded in re-joining the Rohloff cables after separating them to get the wheel off. I inserted the tube that was in the front tyre until it punctured on my last day in Virginia. The patch I applied to it in Hindman, KY appears to be holding. All this boosted my confidence in my ability to do minor repairs on the bike. 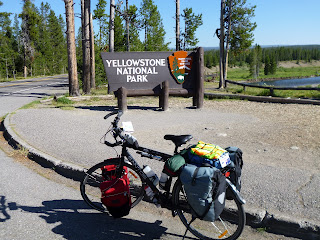 I left Grand Teton National Park, passed through a kind of no-man's-land, and entered Yellowstone National Park. At the entrance was a sign listing all the campgrounds and noting which were full. Most were, including Grant Village. I wasn't alarmed because I knew there was a policy never to turn away hikers or bikers even when the campground is nominally full. Sure enough, when I arrived there was no difficulty in being allocated a site.

I met a cyclist called John on his way from Alaska to Florida. He was towing an extra wheel with two additional panniers on it. He said this was unstable and from time to time caused his middle wheel to skid tipping him to the ground. He showed me a video he made yesterday of bison walking along the road, the traffic backed up, and him sheltering behind a car. Bison can behave unpredictably and the group included calves.

I saw five other eastbound cyclists, only one of whom, Peter, I was able to talk to. That is because the road through Yellowstone is not conducive to stopping except at turnouts, which occur rather infrequently when you are pedalling slowly uphill. On my right for a long way was a precipitous drop to the Lewis River Canyon. I tried to stick to the white line marking the edge of the road and avoid being pitched over.

Despite my losing three quarters of an hour to puncture repair, and more time eating, resting, and chatting, the traffic did not build up much. I reached Grant Village at midday worn out by my exertions.


View Week Eight in a larger map
Posted by Aldernath at 11:06