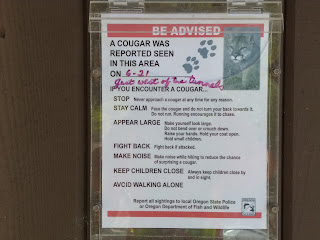 As I inch my way west, the gorge becomes less arid. Today saw the return of trees. Perhaps because of that, today's short and hilly ride (43 km) impressed me as stupendously beautiful. A local cyclist told me it was the best part of my entire trip. 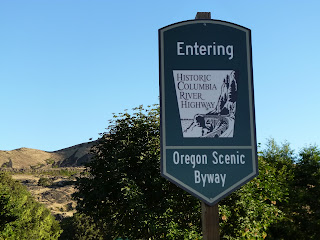 The road now called the Historic Columbia River Highway (HCRH) was built in 1913-22 and ran for 120 km west from The Dalles to Troutdale. Cost and the needs of commerce were secondary to the desire to build a scenic boulevard as good as any in Europe. The road was routed so as to take in all the best views. Gradients were limited to a maximum of 5% and turns to a minimum radius of 100 feet. The road was superseded by, and partially destroyed in the construction of, the later interstate highway I-84. The authorities are now in the process of linking the parts that survive with 'state trails', their name for bike paths. 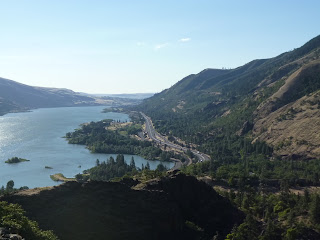 Today I cycled one of the road sections of the HCRH and one of the associated bike paths. I climbed 150 m to Rowena Crest on a road that folded back on itself to maintain the maximum 5% grade. It was a lovely traffic-free ride up through the forest, far from the highway noise and sheltered from the wind. At the top were wonderful views up and down the gorge. The snow-capped tips of Mt Hood (3,429 m) to the south and Mt Adams (3,743 m) to the north peeped over the intervening hills. Apricot and cherry orchards flanked the road. 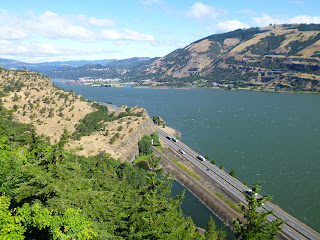 After a descent to Mosier, I joined the state trail to Hood River. I missed the way at first and rode for a km up a ghastly, unsealed, washboarded road until I convinced myself I'd taken a wrong turning. The path was wide, having once been a road, and with an excellent surface. It climbed up high again, passing through a tunnel, before starting a great downhill into Hood River.

In the evening, I met retired Portland couple Ed and Karin, here to celebrate their anniversary, and enjoyed a good dinner with them.
Posted by Aldernath at 13:32