The Lochsa and Selway rivers combine at Lowell to form the Middle Fork of the Clearwater River. It was this latter river that was my companion for today's flat ride of 49 km to Kamiah.

It started raining in Lowell as I was finishing breakfast. I waited three quarters of an hour until it cleared then set off. The hillsides sloped more gently today and the tree cover was less dense. I saw some deer on the far bank and some birds on the water. 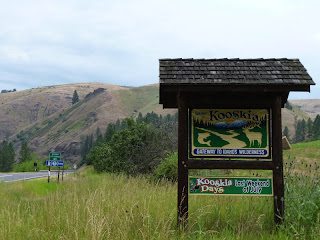 Riding westward on the combined TransAm/Lewis & Clark route, I entered the Nez Perce Indian Reservation and at Kooskia came to the parting of the ways. The smaller South Fork of the Clearwater joins the main river here. The TransAm Trail turns off to the south, following it upstream. I won't see the TransAm Trail again until Astoria, OR, its official end point. I remained on US 12, the Lewis & Clark Trail, which now turned towards the north, following the downstream course of the enlarged Clearwater River.

Although the sky had cleared as I left Lowell, it quickly darkened again and soon after the Kooskia turnoff I was caught in a heavy downpour. I put away the laundry drying on the rear rack and donned my rain jacket for the last few km of the ride.

This time, when the rain ended it stayed ended. The clouds disappeared and the day grew hot and sunny. Kamiah is a small, pretty place (pop. 1,300), very quiet on a Sunday.


This afternoon I worked out a schedule for the remainder of my trip that should see me in Astoria on 29 July and back in Portland on 1 August in good time for my flight home. This is a planning itinerary that I do not expect to stick to absolutely. Many contingencies could arise, the most likely being that headwinds or high temperatures prevent me from riding as far as intended on some days. I have built in some rest days that can easily be sacrificed if that should happen.
Posted by Aldernath at 14:39