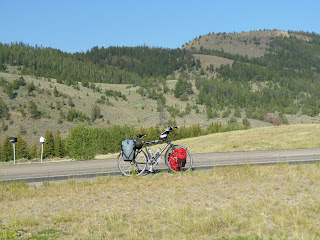 I had breakfast in my room this morning from my own resources – a bagel with peanut butter, a cereal bar, an apple. I drank only water, forgetting about the orange juice I'd put in the fridge, which the housekeeper presumably found later on. Then, packed up, I prepared to leave – except I couldn't open the door. Using the phone, I roused the manager of the family-run motel from his Sunday morning slumbers. Soon he came padding across the carpark in his bare feet, tools in hand. He clambered through the window and dismantled the jammed bolt from the inside. Part of the mechanism had broken and it took him some minutes to release me and my bike. 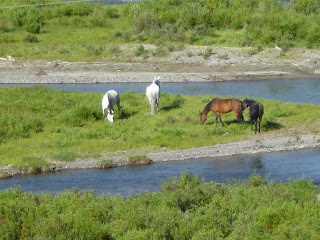 It was later than usual, about 6:45am, when I eventually hit the road. Yesterday's ride may have taken more out of me than I realised or the thinner air was getting to me again. Either way, I found the cycling hard work. I paused for a muffin and Gatorade at the Lava Mountain store then plodded on. The climb wasn't steep – I didn't go below the fourth lowest of my 14 gears – but it was long, 48 km from Dubois to the summit of the pass and my fifth crossing of the continental divide.

Togwotee Pass (pronounced 'toe-go-tee') is 2,944 m above sea level. The summit is not marked but by happy chance I arrived there at the same moment as Tim, a cyclist ascending from the other side. We agreed that we had both been going up until the moment of meeting and that that spot was therefore the summit.

I started down the other side. After a while, the breathtakingly beautiful snow-capped line of the Grand Teton Range came into view. I stopped to take a photo and promptly fell into conversation with three men who had also stopped. They were very interested in what I was doing. In the end I forgot to snap the mountains and snapped them instead.

Continuing down the 6% slope of the mountain, I came to a 6 km stretch of road works. Six days a week, cyclists are banned from riding through this work site. They and their bikes are transported in a pilot truck. The three Brits had that experience yesterday. On Sundays, however, the work site is quiet and cyclists are left to pick their way through with the rest of the traffic. There is one rough gravel lane each way, the edges and centre line defined by occasional cones. Fortunately, traffic was light and in the time it took me to ride through this section, only seven vehicles came up behind me and only one of these was a semi-trailer.

Soon after that I stopped for the day, having ridden 76 km in all. Readers who are familiar with the TransAm Trail may wonder why I did not continue to Colter Bay. The reason is that I am going to ride the Teton Spur, an optional extra included on the ACA map that allows cyclists to see more of Grand Teton National Park. Tomorrow I will head south to Jackson and the following day return to the main route at Colter Bay. 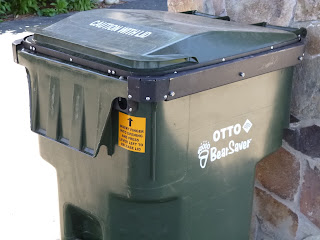 I'm in bear country here. Food has to be stored in bear-proof containers overnight. The photo above shows a wheelie-bin designed to exclude bears.