At breakfast I met David and Don, local cyclists who are about to ride back to Clarkston from near Astoria to raise funds for their elementary school's archery program. We may pass along the way. They are allowing eight days including one rest day for the ride. I have 12 days available to cover the same distance. The difference is that they will have a support vehicle and will be cycling with the wind behind them. I will have the wind against me and am likely to find it strong.

Today's ride of 50 km was almost entirely on US 12, a highway that was everything yesterday's US 95 was not. The shoulder was wide and smooth, free of rumble strip and debris, a joy to cycle on. Only during the steepest part of the day's climb did the shoulder narrow, and that was to make room for a slow vehicle climbing lane, which was in effect a wider shoulder. Traffic was light. 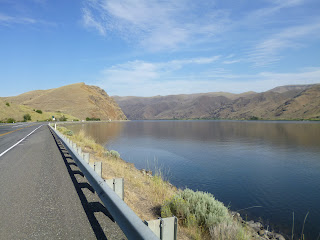 Initially the road followed the Snake River through a landscape of rocky bluffs and treeless slopes. After 16 km it turned away to start the long climb out of the valley, taking a more direct route than the river. Lewis & Clark made use of this shortcut on their return trip east in 1806. 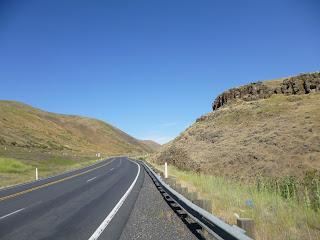 The first 9 km of the climb was easy and I rode in gear 8 (of 14). The second 9 km was steeper and I used gear 6 for most of it, gear 4 towards the end. For comparison, I used gear 5 for nearly all of yesterday's long climb out of Kamiah. Today's Alpowa Summit is 848 m above sea level, 600 m higher than Clarkston.

The last part of the ride into Pomeroy was downhill. The motel is unusual in not having wifi but I found it elsewhere in the small town (pop. 1,400).
Posted by Aldernath at 14:05