I have accomplished what I set out to do and cycled across America coast to coast unsupported. I rode from Yorktown, VA to Astoria, OR as planned and a bit further at both ends. I began by cycling from Newport News to Yorktown. I finished by riding on from Astoria to Seaside. Total distance cycled between the extreme points of Newport News and Seaside was 6,484 km. Total time between these places was 82 days, including nine rest days when I did no cycling. Subtract one day and 52 km to get the figures for the Yorktown to Astoria section; or add two days and 197 km for the complete trip including the return ride to Portland still to be completed.

As it turned out, I had ample time within the 90 day visa window and could have stayed on the TransAmerica Trail all the way without taking the shortcut on the Lewis & Clark Trail at the end. Indeed in the last two weeks I took unnecessary rest days and rode frustratingly short stages to fill the time remaining. While I regret missing the Oregon part of the TransAm Trail, I am glad I experienced the Columbia Gorge, which I would not have seen if I had stuck to the TransAm.

I was very lucky with the weather, which almost all the way was perfect. I had only a few days of headwinds and only a few of rain. I was never either too hot or too cold. The wind was important. There were times, notably in western Kansas, when I took advantage of favourable winds to ride double stages. If the winds had been blowing the other way, as they might have been, or if I had declined to exploit them, I would not have gone so far so quickly and would have had longer distances to ride in the final weeks.

I had no illness or injury throughout the ride except for a saddle sore in the first week that responded quickly to treatment and a shortage of energy on the first day of the second week probably caused by not eating enough. I found the ride physically less arduous than I expected. The training I did in Australia turned out to be adequate, which before I started I was not sure it would be. Mentally the ride was also less demanding than I expected. I maintained a positive frame of mind throughout and never experienced a psychological low point. I got so much into the swing of the ride that if the USA were twice as wide and my visa valid for twice as long I could happily have kept going for another twelve weeks.

Although I still have 50 km to go before Portland, I think I can say that my bicycle has been wonderfully reliable. I have had one puncture in each tyre and did not use the spare tyre I carried with me. I did not need the spare brake pads either. The only maintenance I conducted was to pump up the tyres every few weeks when I came across a floor pump. I checked the brakes and the firmness of the tyres every morning and occasionally checked the tightness of the bolts. I lost the rubber foot from my kickstand and was able to replace it a couple of weeks later. A metal contact broke off inside my rear light when I was changing batteries and it is probably broken permanently. I had a spare rear light with me. My GPS receiver broke at the end of the first week and was not missed. The Rohloff hub is due for another oil change, which I will do when I get home. 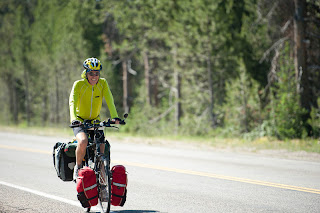 I used my tent only three times, at Colter Bay and Grant villages in Wyoming and at Powell in Idaho. In all three places I could have stayed indoors if I had booked in advance, which I deliberately did not do. If I had stayed overnight at West Roosevelt, WA on the Lewis & Clark Trail I would have had to use my tent as there is no indoor accommodation on that stretch of road. I used my sleeping bag more often than my tent, in a variety of halls, hostels and other accommodation (Glendale VA, Hindman KY, Sebree KY, Farmington MO, Everton MO, Guffey CO, Jeffrey City WY) as well as in my tent. 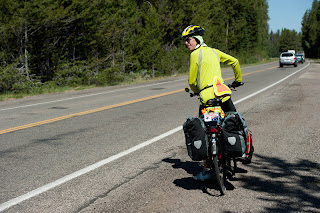 I have been asked which part of the trip was the highlight for me. I find the question difficult to answer. I have been living so much in the moment. Each day has brought its own new wonders and challenges. I haven't had time to think back. Later I will read through my blog and perhaps that will enable me to see the trip as a whole and identify the best parts. 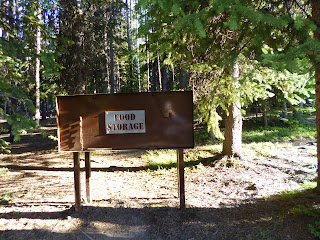 Undoubtedly, however, one of the main things I will take away from the trip is the memory of the many people I met, cyclists and non-cyclists, Americans and non-Americans. I experienced countless instances of friendliness, generosity, and helpfulness. I feel privileged to have met so many good people and thank them all sincerely. Motor vehicle drivers too were almost always courteous and gave me as much room as they could on the road. I appreciated their consideration for a slow and vulnerable cyclist.

I am very grateful to the many people who have supported my ride by making a donation to Operation Smile, the charity I have been raising funds for. I urge any reader who has not already done so to consider making a donation now, however small, through the links on this blog. The donation pages are not under my control and with the ride over they are likely to be taken down soon. Your contribution can make a lasting difference to a child's life and I hope you will help.


(Today I cycled 110 km from Astoria back to St Helens with a stop for second breakfast at Rainier. Average speed 19.4 km/h.)
Posted by Aldernath at 14:39