Having cycled most of today's intended route yesterday, I allowed myself the luxury of an extra hour in bed this morning and waited for the motel's continental breakfast to open at 7am. As a result, I was on the road almost two hours later than I might have been, a delay that had to be paid for in extra pedalling effort. 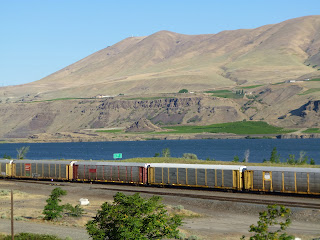 The weather forecast was for the wind to strengthen by 5 km/h each hour of the day. When I set off it was already brisk. The first 13 km and the last 4 km were on the traffic-free US 30. The balance of the day's 33 km were on the interstate highway I-84. Sunday morning traffic was light and most vehicles moved over to the left lane as they passed me, perhaps afraid, as I was, that a sudden gust might blow me under their wheels. Sometimes a headland would shield me from the wind; then I would round a corner and be exposed to the full force of it. If I had stayed last night at West Roosevelt and attempted this stretch later in the day it would have been much harder. As it was, the short flat ride exhilarated without exhausting me.

The Dalles is spread out along a bend in the river, downstream of a major dam. The only thing I knew about it beforehand was that it is home to a Google data center. As I cycled through to my motel on the far side, everything was closed except for a stall in a car park, where I enjoyed a chat with the proprietor over a cup of hot chai and a muffin.
Posted by Aldernath at 11:28