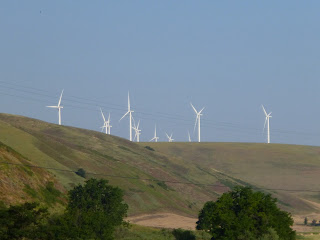 The good shoulder on US 12 dwindled to nothing for 20 km after Pomeroy then came back then dwindled again. For the longish hill before Dayton, I had a climbing lane beside me. Traffic was light but included a fair number of heavy vehicles. 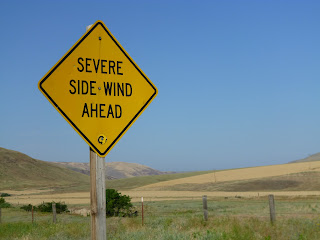 I started to see wind turbines and at one point rode between two lines of hills topped with them. I began to wonder whether perhaps I was entering an area with lots of wind.

I paused at Dayton (58 km) for refreshments. I'd been thinking about stopping here for the day. My master plan for the rest of the trip, drawn up on Sunday, was wrecked on Monday when I rode a double stage. Staying a night here would put me back on schedule. 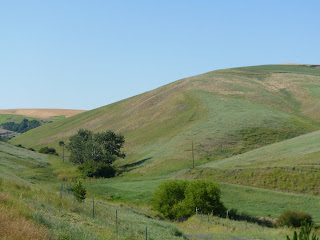 I decided to go on. It was only another 47 km to Walla Walla where I planned to take a rest day. It seemed better to arrive there after a respectable 105 km than after three short days in a row.

I met Adrian and Sam from Oakland, CA, whose ride from Portland to New York began only a few days ago. As with other eastbound cyclists I have met recently, I half wanted to turn round and ride back across the country with them. The end of my trip is approaching too fast.

The map directed me away from US 12 onto the peaceful Middle Waitsburg Road. Local cyclist Philip caught me at the junction and kept me company up the first hill. He was on a training ride from Walla Walla to Waitsburg and back. 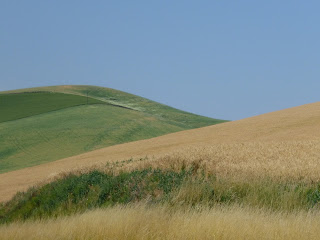 I have probably seen the end of long hills now. While there will be plenty of ups and downs to come, I don't expect the sort of sustained climbing over many km that I have enjoyed so far.


View Week Ten in a larger map
Posted by Aldernath at 15:28