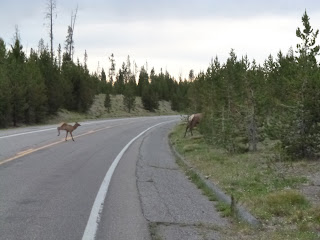 I left at about 6:15am and soon had two encounters with animals. Four antelope slowly crossed the road in front of me. This early in the morning I was wearing full finger gloves. By the time I had removed them and got out my camera, I was only able to snap the last two. I put the camera away and cycled on, only to see four larger antelope waiting behind some bushes for an opportunity to cross. Not wanting to spook them, I carried on. 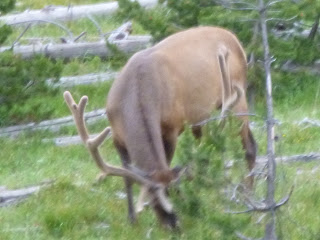 Further on, several cars had stopped. I stopped too and snapped a grazing animal with a magnificent rack of antlers.

I was in stronger cycling condition today, perhaps because it was overcast and cool. I roared up the two big early climbs to my seventh and eighth crossings of the continental divide. Both were higher than yesterday's (2,558 m and 2,518 m compared to yesterday's 2,435 m) and both were followed by a great downhill. There was a lake, Isa, right on the second summit, Craig Pass. It has the curious property of draining in two directions: one outlet flows to the Missouri, Mississippi and Gulf of Mexico, the other to the Snake, Columbia and Pacific Ocean.

I turned off to the historic Old Faithful Inn for a slap-up buffet second breakfast. Traffic to this point had been minimal. Now it began to build up, but maybe four fifths of it was heading in the contrary direction. Traffic going the same way as me remained light. A motorhome passed me, its boarding steps deployed out to the side, ready to scythe an unwary ankle. 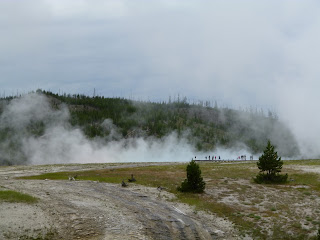 I was in geyser country now, cycling through a flat steamy landscape. 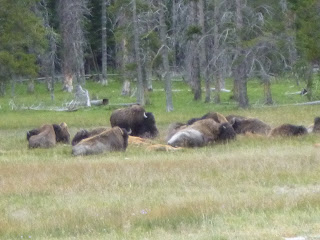 When I saw another collection of stopped cars up ahead I knew what to expect. This time it was a herd of bison, in the distance, lying down.

I talked to David and Zach, cycling from Vancouver, BC to Jackson, WY. They told me the best part of my trip was ahead of me, from here to the coast. They warned me against camping in Wisdom, MT as they found the mosquitoes there unbearable. Mozzies made their first appearance on this trip after I crossed Togwotee Pass on 1 July. They have daily grown more irritating and were quite bad at Grant Village campground, even this morning.

At Madison Junction I turned towards the western exit of the park, following the Madison River. Then in the space of a few km, I left Wyoming, entered Montana, left Yellowstone National Park, and entered the town of West Yellowstone (pop. 1,500), where my eighth map section ends. The distance cycled today was 86 km.
Posted by Aldernath at 15:44