There were no services on the road until after the two big climbs that constituted today's major challenges so I made sure I had plenty to eat before leaving Dillon. At 6am opening time I was the first customer at the McDonald's a minute's ride from my motel. I cycled through the town and under the interstate highway onto Route 278, which I followed for the rest of the day.

The climbs were long though neither individually gained as much elevation as the one yesterday. Ascending from the moment I left Dillon, I took about two hours and twenty minutes to reach Badger Pass (2,060 m above sea level). There was a good descent but as usual it didn't last as long as the climb.

The ACA's Great Divide mountain bike route joined from my left and for 11 km it and the TransAm Trail shared the same road. At the junction where they parted company again, I stopped by an information board to have a snack before tackling the second climb, which was just ahead. I was joined there by Hendrik, a Dutch cyclist heading north on the Great Divide route. Although he hasn't been mentioned in my blog before, I knew him already. Our tent sites were across from one another at Colter Bay Village six days ago and we had had a long conversation there. We had another long conversation now.

After a while two southbound cyclists on the Great Divide route joined us. While they and Hendrik exchanged information about their respective ways ahead, I looked around. Here were four cyclists in the middle of nowhere about to head off in three different directions. There were no engines to be heard, no motor vehicles or other people to be seen. We were alone under the big Montana sky. 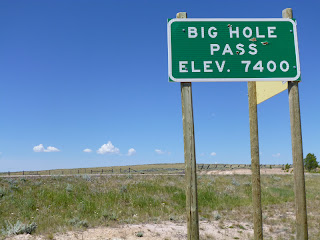 After we parted, I began the second climb, which topped out at 2,243 m. Perhaps because I was buoyed by meeting the others, I found it less demanding than the previous climb.

There was a great sweeping descent into the Big Hole Valley.

This valley is known as the land of 10,000 haystacks and I saw several examples of the beaverslide, a tool used to make large haystacks.

Riding on, I met Steve and Lin, cycling from Seattle, WA to Boulder, CO. We had a good chat. They began on the Northern Tier, coming down through Missoula to join the TransAm.


I was hungry now and by the time I reached Jackson, MT it was 1pm. Capt Clark investigated the hot springs there 206 years ago and it was in the Hot Springs Lodge that I had lunch. Afterwards, I completed the last leg to my destination, Wisdom (pop. 114). The day's ride was 107 km, slightly shorter than yesterday and the day before, yet I finished a couple of hours later in the day. I was glad to get out of the sun. The shade temperature was about 28C.
Posted by Aldernath at 15:01